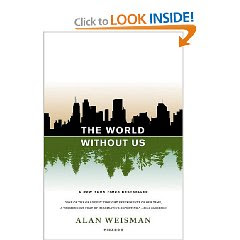 Alan Weisman, an award-winning journalist, researches every possible corner of the idea of an abandoned world in his book, "The World Without Us."

Its pretty interesting to consider the situation. What would happen to the world if we (homo sapiens, as we are referred to throughout the book, merely another species) suddenly disappeared? What if a virus took us out in less than a day? or a natural disaster? What if we were raptured away to heaven? or aliens abducted the entire human species? Would the world return to its "Garden of Eden" state or have we humans done too much damage? How long would it take and how would it happen?

Weisman divides his book into several segments, looking at different aspects of the theory of a world left to itself. He begins in the city, and how quickly plants, both native and imported, natural and landscaped, would take over the buildings, subways, streets, and sidewalks. He discusses where we came from, the future of our empty cities and their new inhabitants, the animals who will evolve to take our place.

Stepping outside the city, Weiman focuses other chapters on the evolution of man in Africa, polymers and the lifespan of plastics, petrol and nuclear impacts on the world and even farming and its influence on the natural state of the earth. His visualization of the future is research packed and is interesting, forcing you to think broadly and objectively about the impact of the human race.

This book heavily relies on the opinions and studies of a variety of scientists, researchers and activists. Although his expansive research does give the theories some credibility, sometimes it gets bogged down in the science of it all and the hundreds of thousands of years he uses as a reference for the life-span of the earth is often times too big to comprehend. Which is fine if you are scientifically minded. But if you're like me, you realize much of the content is going over your head and you just don't care. There is a lot to learn, much of it interesting and much of it I just don't agree with.

Despite all the research and science, what is missing is spirituality. Religion and faith are referred to, in the last chapter, but merely as an obligatory side-note, just another theory. In fact, religion seems to be ridiculed in this passage, concerning the resurrection. Commenting that a messianic reign would result in a severe population reduction of the unrighteous, Weiman follows up, "unless...the dead would be resurrected, which could trigger both resource and housing crises." Really? Would we really be worried about resources and housing during a messianic reign?

He ends his musings on the subject of depopulation of the earth so that we can experience "the growing joy of watching the world daily become more wonderful." They call it 'voluntary human extinction,' limiting every human female capable of bearing children, to one. At this point, I have forgotten anything scientifically worthwhile in the previous 300 pages. What he says in the last 5 pages, in my humble opinion, discredits it all. Its just a completely different paradigm, void of faith. But then it gets better, or worse, as he explores another option. A microbiologist Weisner interviews suggests, we "find a fertile planet somewhere big enough for all of us, holographically clone our bodies, and upload our minds across light-years." He then has the audacity to say, "Unless...there really is something called a spark of life."

An interesting book, but too far from my faith-based paradigm to give much credence to. Suffice it to say, I will not read it again or place it in my home library. That being said, its up for grabs if any wants to read it.
Posted by Brownie Bites at 6:51 PM