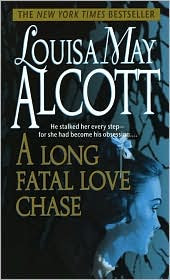 I've been reading "A Long Fatal Love Chase" for bookclub this month. What kind of trashy romance-addicted, froo-froo, shallow bookclub do I attend, you ask? Its actually a great bookclub and this novel is not trashy. In fact, it is written by Louisa May Alcott. She wrote it a couple of years before "Little Women." It was actually deemed "too sensational" to publish when she originally wrote it and was later discovered by this current publishers in 1993.
Anyway, it was a fun romantic thriller to read well written. I feel compelled to record one of my favorite passages. It is set after the hero and villain fight and the hero wins. The following is a description of the hero.

"Few men had ever conquered Tempest in anything and he felt
superior to most; but this man surpassed him in strength, skill,
courage and magnanimity, for, hard as he was, Tempest still felt the beauty
of a generous act, a noble word.

"Ignatius had conquered in love and war;
had borne insult meekly for himself,
had avenged it manfully for another,
had given compassion for contempt,
and having won the victory generously spared his enemy."

But the story is far from over at that point and Tempest is not so changed as he may seem at that moment of defeat. So if you want a good romance thriller to read during the Valentine season, this is a good pick.

Posted by Brownie Bites at 8:28 AM