Book Review: Among the Hidden/ Among the Imposters

I’m two books into the Shadow Children series by Margaret Peterson Haddix and I’m itching to get my hands on the 3rd (out of 7) book. Parker introduced me to these books and was pretty excited about them. The first book, “Among the Hidden,” introduces us to young Luke. He spends a lot of his time outdoors on his family’s farm, running wild and free as any 8-year-old is inclined to do when he has no school and can’t go into town. All is heaven for him until he is forced inside as other homes are built nearby. He is in danger of being seen by others, which is a bad idea for him, because he is a third child. The penalty? Death.
In this world, severe famine and other factors have driven the government to regulate families to two children and only two. This is enforced by the population police, who mean business. So Luke goes into hiding in the attic of his room and is never allowed in any of the main areas of the house, let alone outside. So he spends a lot of his time looking out the small slits in the attic vent. It is there that he discovers he may not be the only third child and his adventures begin. 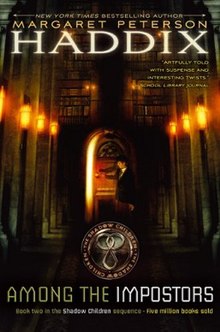 The next book is “Among the Imposters.”  Luke continues his adventure in a different setting under a different name. He continues to make discoveries about his status as a third child and what that means and who is involved in efforts to thwart the population police.
These are such fun books. The characters are well drawn and the situations are believable and real. It’s a quick read, definitely suitable for a 2-5 grade level. Even though the intended audience is so young, the story kept me interested and entertained, imagining a world with population police and restrictions that force young members of society into hiding.
Posted by Brownie Bites at 9:07 PM