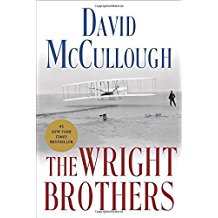 "The Wright Brothers" by David McCullough is not the sort of book I pick up lately, mostly because I just don't have the brain energy to focus that much. But I'm so glad my book club read it because I really enjoyed it.

As you might surmise, this book is about the Wright brothers and their attempts and success is creating a flying machine. I never realized how important and interesting the beginning and ending of their story is. They began as bike makers,, which was actually almost scandalous at the time because bikes were deemed unsafe. And then in the end, the United States wasn't interested in their plane. European countries were more interested and they spent many years abroad, selling their plane. All of the history was very interesting.

But the most interesting part to me was to see how connected the brothers (and whole family) were. They never married and so spent their lives together. They knew each other so well, they worked together like a well-oiled machine. And work they did. Their work ethic was amazing.

And as always, David McCullough was thorough and supplied the perfect amount of information to keep it interesting but not over-whelming.

This poem is the heading to one of the chapters and I love it!

One ship drives east and another drives west
With the self-same winds that blow.
''Tis the set of the sails
And the gales
Which tells us the way to go.

Posted by Brownie Bites at 2:02 PM