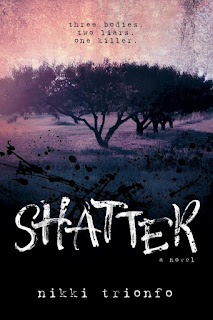 "Shatter" is a new-release by Nikki Trionfo and it is awesome!
But I'm getting ahead of myself.

First, take a look at this cover-
So great, right?

And the tag line-
three bodies.
two liars.
one killer.
Even better!

Salem's life is falling to pieces, shattered, by the recent death of her older sister, mentor and friend, Carrie. Others are convinced it was a freak accident but Carrie doesn't buy it. Something feels wrong. But Carrie's is not the only recent death. When Juan Herrera, a farm worker, turns up dead in her father's peach orchard, her father becomes a suspect. Salem knows there is more to the story in both murders and knows if she wants answers, she's going to have to find them herself. Uncovering the mystery leads her into dangerous gang situations, tense confrontations, new relationships and a never-saw-it-coming ending.

There are a lot of reasons why I enjoyed this book. Salem is awesome. At the start of the book, she is fragile, having just lost her sister. She is timid and accustomed to following her sister's lead. The loss Salem feels is real, raw and transfers from the written page straight to the heart. But she doesn't stay weak for long. Throughout the story, she grows and develops, through trial and error, and becomes strong and confident in her own self. Yay for strong female leads!

I also enjoyed the plot. I started reading this book at a time when I was frequently interrupted by children. And so, the first few chapters, which include several flashbacks and jump around a bit, were confusing. But overall, Trionfo did a great job of slowly introducing characters so that I remembered who they were and why they were important. She just led me right along until I was so immersed in the plot I couldn't wait to get back to the story each night.

Another thing I loved about the plot was that it was about farming and peach orchards! The conflict between the Growers, the Farm Workers Union-and also the immigrant workers and the influence of gangs was woven together in a way that made it all make sense. There is also a love story that is not teen-age-angst-y, which is a relief. It is complicated in the best sense of the word, because of ethnicity, gangs and trust issues. The mystery itself keeps you itching for each new clue. The diversity of characters is great with the Hispanic gangs and immigrant workers and white growers, which feels so fresh and new in the book market these days.

I'm excited for my 16-year-old daughter to read this book. Look for it on Amazon in paperback and e-book. It's a great fresh read!

Also- I talked to Nikki Trionfo at the Storymakers Conference last weekend and she is every bit as cool as her book! 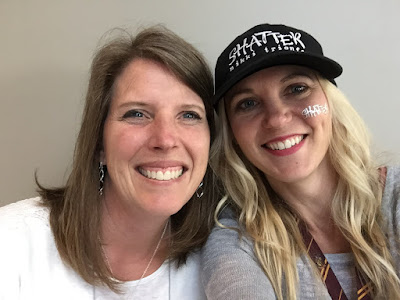 Posted by Brownie Bites at 7:00 AM