The deadline was months and months in advance of the actual conference. Although I had written and re-written and taken this chapter to both of my critique groups for deep cleaning, I put off making the actual changes until the day it was due.
Stupid.
I also asked Brenda from my weekly writing group to do a thorough edit. She also did it that night. I was ready to submit but when I saw her edits start coming through, it was so much better. The problem was, it was late. And I was slow making changes.
By 11:30pm, I was still toggling between documents trying to make the changes. I called Brenda. “HELP!”
“Just accept the change in the comment box,” she said.
Duh, Why didn’t I think of that? Uh, because I wasn’t exactly sure how that worked.
“Do you want me to do it for you?” Brenda asked.
“Yes, please. I love all your changes. Just accept them all.”
So she went to work and I waited, watching the clock.
Ten minutes.
Seven.
“Done.” Brenda’s encouragement flooded through my cellphone.
“What do I put in the cover letter? What do I put in the body of the email? What do I put on the subject line!?!?”
“I’ll have Cindy call you.”
Click.
The mouse jumped around the computer screen, jittery with nerves, as I tried to find the instructions on the website.
Cindy called.
“HELP!” I nearly cried.
“OK, type this.” Cindy was calm and confident. She walked me through each line of the email and submission guidelines. I typed like a robot, filling in the blank spaces on the screen until I pushed send.
“11:58.” Cindy said. “You made it.”
“Thank you.” I could hardly form the words. Nerves and brain synapses were colliding like a train wreck during rush hour. I was in full-on fight or flight mode, adrenaline bouncing through my body like a pinball machine. I stood and walked around the kitchen. My hands shook as I placed them over my heart which was pounding as if the house was on fire and the flames were licking at my feet.
I looked around the kitchen. I was alone. Everyone was sleeping. No one was there was witness the trauma of my procrastination except two voices on a phone.

It wasn’t until the next day when I dared to look at the email I sent.  I was devastated to find I’d probably sent the wrong one in. It had many of the editorial marks on it. 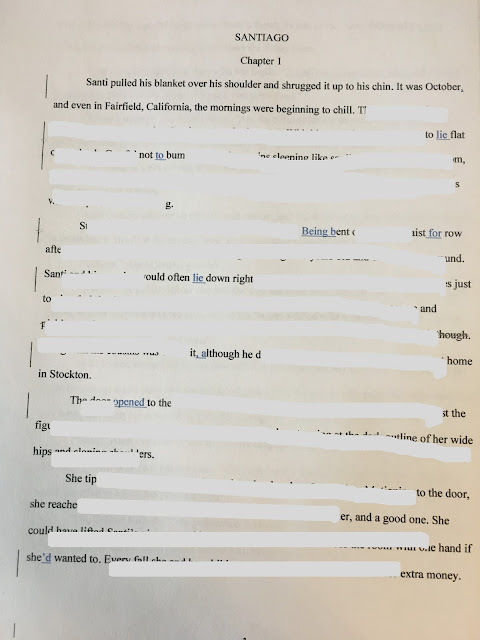 But what’s a girl to do? The deadline was past and the email was sent. So I waited it out. I waited three long month, the regret passing through my mind periodically.

When the awards luncheon began, I had already resolved myself to rejection. So when they called my name and posted my title on the screen as Second Place winner of the Adult Fiction category, I was surprised and elated and quite frankly, in shock. And soooo HAPPY! 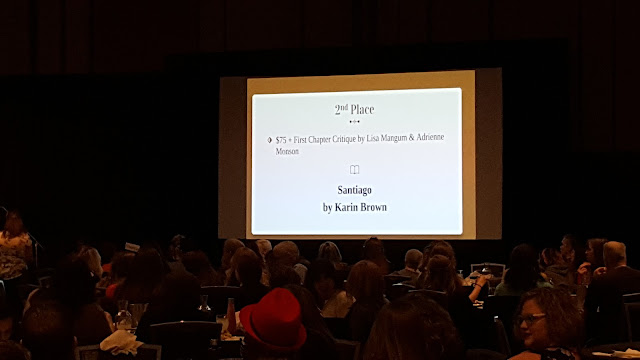 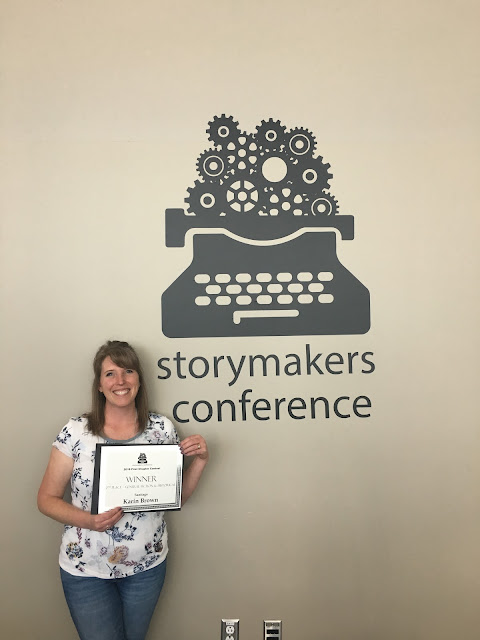 Only one of the four judges mentioned the editorial markings. :)
Here is the first page of the chapter-

Santi pulled his blanket over his shoulder and shrugged it up to his chin. It was October, and even in Fairfield, California, the mornings were beginning to chill. The apartment floor provided little comfort, but Santi was too tired to care. With his eyes closed, he turned to lie flat on his back. Careful not to bump any of his cousins sleeping like sardines in the small bedroom, he reached his hands over his head in a long stretch. The rising sun teased the window curtains with the promise of morning.
Strawberries were the worst to harvest, he decided. Being bent over at the waist for row after row was painful, even with the advantage of being nine years old and closer to the ground. Santi and his cousins would often lie down right on the dirt between the rows of strawberries just to give their backs a break. But when Mama and Abuela gave the order, they were up and picking again, with barely a siesta in between. Santi didn’t mind the hard work too much though. Being with his cousins was worth it, although he did miss his dad, who was hard at work at home in Stockton.
The door opened to the small bedroom where he lay, and a shaft of light slipped past the figure in the doorway. Dust danced around Aunt Concha, stopping at the dark outline of her wide hips and sloping shoulders.
She tiptoed over sleeping cousins and put her hand on Santi’s leg. Motioning to the door, she reached out to help him from the floor. Aunt Concha was a worker, and a good one. She could have lifted Santi’s nine-year-old body up and carried him across the room with one hand if she’d wanted to. Every fall she and her children worked the fields in Fairfield for extra money. And every fall she opened her home to Santi’s family to join in too. Santi followed his aunt through the minefield of sleeping bodies into the living room.
Aunt Concha cupped his face with her hands. “An officer is coming to take you to your grandfather. Don’t worry, Santi. I’ll pack you some food.”
Posted by Brownie Bites at 4:34 PM