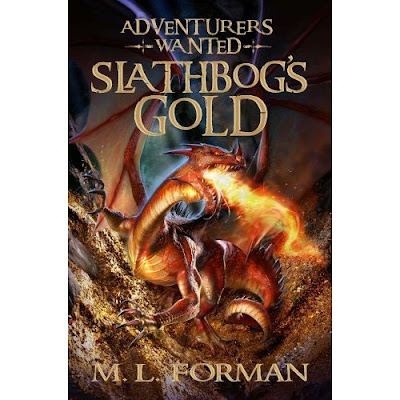 Alex is not happy with the way his life is going. Although he is busy enough, working with his step-brother at the Happy Dragon tavern his step-father runs, he is yet unsatisfied. But all of that changes for Alex while on a walk to cool his temper and clear his mind.

Seeing a sign that reads "Adventurers Wanted" in the window of a small book store marks the beginning of, well, an adventure. That's what adventurers do, afterall. But we soon find out that Alex is not your average adventurer. His ability to simply see the "wanted" sign marks him as someone destined for greatness, of great power and strength. His valor, however, is something he has to determine himself.

Alex is quickly introduced to the obligatory forrest-dwelling elf and tunnel-dwelling dwarf as he begins his journey as the eighth member of an adventuring team on the hunt for Malgorath's treasure, a dragon whose notoriety precedes him as well as the magnitude of his treasure.

Troll encounters and bandit fights ensue as Alex begins his adventure, not just in pursuit of treasure, but in pursuit of who he really is. Although meeting with an Oracle gives him some needed confidence and comfort in his search for identity, he still wrestles with doubts as simple as whether or not he believes in magic; and as complex as whether or not he can rise to the power everyone is convinced is within him. And if he does believe he is someone remarkable, what will he do with that knowlege? And there-in lies the true beginning of his adventure.

His search for identity continues as Alex returns home and discovers there is more to his background than he thought. Regardless of the doubts and questions that still run through his mind and his continual search for a more complete self-identity, he is satisfied in knowing he is not just common help in the tavern. He is an adventurer.
Posted by Brownie Bites at 7:00 AM